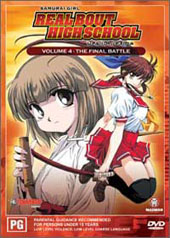 Unavailable
Sorry, this product is not currently available to order
Episode 11 - A Maiden's Way At the Hiten shrine, Ryoko practices her kendo skills, but can’t seem to concentrate. She is becoming ever more worried about Tatsuya and Shiori’s relationship. Meanwhile, Tessai remembers the time when Ryoko first walked into this shrine, a time when Ryoko still had the spirit of a tiger. Episode 12 - Final Battle in the Arena To confront Tatsuya and to put an end to her feelings towards him, Ryoko arrives at the school auditorium, just in time for the big school festival. The day has finally come: Shizuma prays for Ryoko’s success during the show, Miyuki senses something will happen, and Setsura begins to move as he finds out the Shi Shinkan’s true intentions. Episode 13 - A Battle Against Fate During the show, Daimon High School gets linked to the netherworld. Tons of monsters start to appear and the whole school is in chaos. A creature appears and calls himself 'Gates.' Ryoko is enraged that her show has been disrupted and begins her battle against Gates. At the same time Keiichiro Nagumo appears in the midst of the chaos to confront his destiny. Ryoko's true feelings and Keiichiro's final battle are finally coming to a head. Special Features:
Release date Australia
January 1st, 2007
Movie Format
DVD Region
Edition
Brand
Aspect Ratio
Language
English, Japanese
Length (Minutes)
75
Studio
Madman
Subtitles
English
Supported Audio
Genre
Original Release Year
2003
UPC
9322225011076
Product ID
1460716