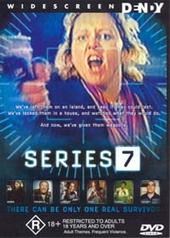 There Can Be Only One Survivor No Lifelines. No Free Spins. No Bonus Rounds (Except Ammunition) Seen the show Survivor and wished they would start killing each other?

In Series 7 six contenders are randomly chosen in a lottery to participate in a lethal game of cat and mouse. Armed with a gun and followed by a camera crew, each contestant must kill or be killed until one sole contestant remains as winner. This is not merely a satire on reality TV. It is an example of just how far people will shamelessly go for fame!