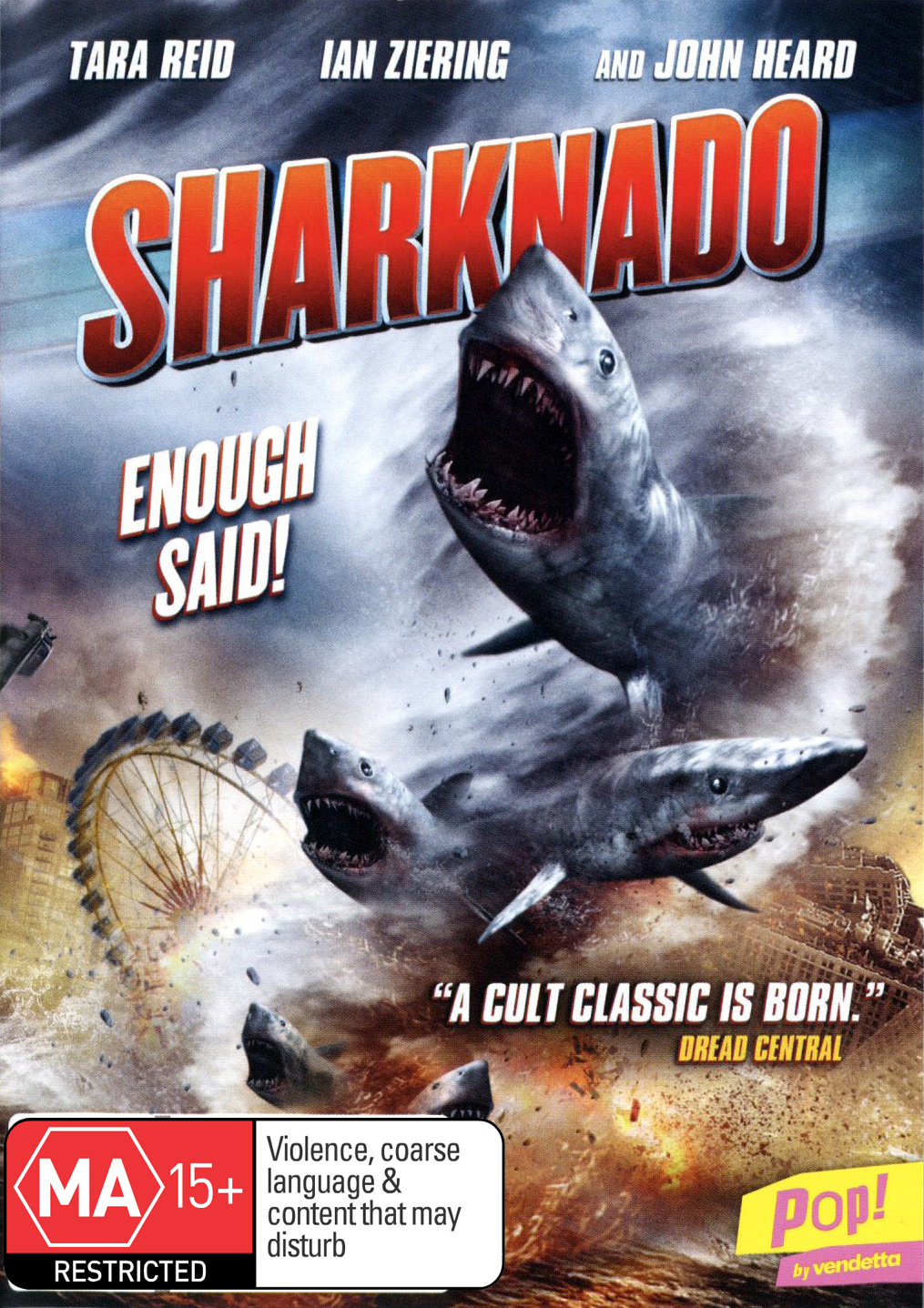 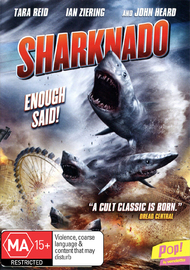 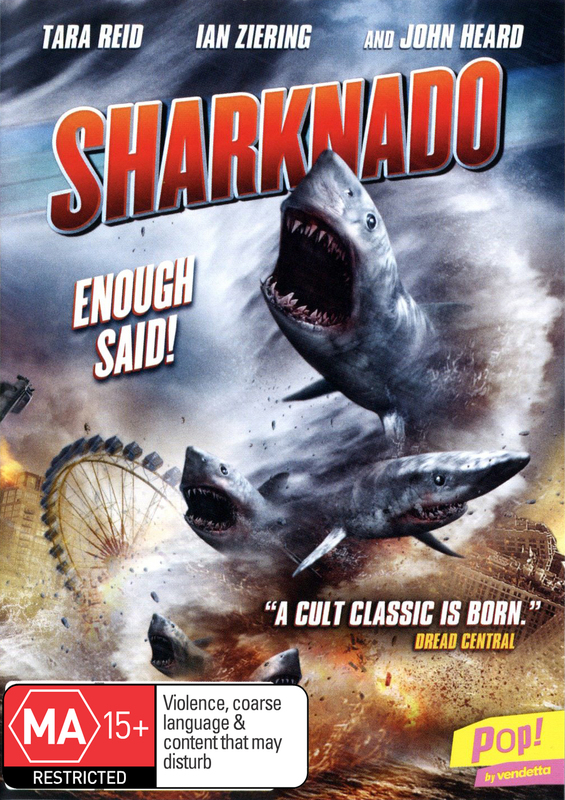 1% of people buy Sharknado and The Hobbit: The Desolation of Smaug ~ DVD. 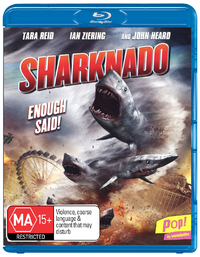 Unfortunately, this film is a let down after the build up to cult status that it claims to be. It isn't good enough to be a B-grade horror, and doesn't have the great, quirky cast line-up to make it a cult.

Sharknado is a 2013 comedy horror / disaster film on DVD, about a waterspout that lifts sharks out of the ocean and deposits them in Los Angeles.

When a freak hurricane swamps Los Angeles, thousands of sharks terrorize the waterlogged populace. And when the high-speed winds form tornadoes in the desert, nature’s deadliest killer rules water, land, and air…

From the Pop! by Vendetta series.

"Sharknado is 86 non-stop minutes of OMG, WTF, and LOL moments. A Great White F5 of carnage, chaos, and sheer insanity. I can’t believe this movie exists. I can’t believe how much I loved it.

This movie… Where to begin? How do I put this into words? This is one of the damndest things I’ve ever seen. The only thing I’m certain of is that The Asylum, Syfy, and all other b-filmmakers might as well retire the shark genre after this because I don’t know where you can go from here or how you can possibly top it.

I don’t think you need me to tell you that you shouldn’t expect top-notch digital effects work. Personally, that didn’t bother me at all since so much of the imagery in Sharknado is so off-the-wall it would almost defeat the purpose and detract from the amusement if it all looked totally realistic. Honestly, is there any way you can make a giant waterspout filled with sharks ripping through downtown Los Angeles look completely realistic? Flying up close to a tornado in a helicopter and lobbing homemade bombs to blow up the sharks, bombs that somehow kill the tornado as well: That’s not something that’s going to look believable no matter the quality of the effects work. As for the film’s final shark attack, not since the guy on the jet ski rode straight into the shark’s mouth in Shark Attack 3: Megalodon have you seen anything like it.

Powerful Hurricane David is preparing to make landfall in Southern California. The populace seems strangely unprepared for such a storm. Not that it will matter since who could possibly be prepared for a storm that floods the city streets, fills those flooded streets with man-eating sharks, and spawns waterspouts that suck up all those apex predators, then becoming full blown sharknadoes that destroy and devour everything in their path.

Now you might be asking yourself some pertinent questions as all this is happening. Like how come the tornadoes don’t shred the sharks just as they do people, places, and things? Or how is it those sharks manage to stay alive so long without water to breathe? Or when did sharks develop such incredible leaping ability? Or why in the midst of a monster hurricane is the sky often so clear and sunny? Or why does it appear that every shark on planet Earth was gathered off the coast of California waiting to get swept inland by the storm?

If you’re the sort who must have questions such as those and many more where they came from explained in a satisfactory manner, then you’re completely missing the point. With a movie like Sharknado you either accept it on its own absurdist terms and go with it or you shouldn’t even be bothering. Those willing to just go with it are in for a hysterical roller coaster ride that doesn’t take itself too seriously while taking itself just seriously enough that it doesn’t play as an outright comedy or come across as too self-aware of its own madness.

As is so often the case in disaster movies from The Asylum, the crux of the action is built around a family in a vehicle desperately trying to escape certain death as they set about to rescue other family members in harm’s way. In this particular instance, beachside bar owner Ian Ziering, of the original “90210”, dodges floodwaters, tornadoes, sharks, and even rampaging Ferris wheels to rescue his teenage daughter and estranged wife (Tara Reid, the only cast member who doesn’t appear to be having any fun), and from there they all venture off to another part of town to rescue their teenage son. If they can find time along the way to rescue a busload of school children stranded in shark-infested waters, more power to them.

Joining him on his quest will be the best friend whose shins act as shark magnets, the shark-hating potential love interest, who, judging by the oddly-shaped scars on her leg, has either been the victim of a past shark attack or her thigh has grown gills, and John CHUD Heard as a more drunken version of Norm from “Cheers”, a friendly barfly who refuses to leave behind his favorite bar stool amid Jawsmageddon. Jawsmageddon? Oh, crap! I think I may just give The Asylum the title for a sequel.

So often with Syfy and Asylum movies there is this sense that the film is just a series of random events cobbled together with little rhyme or reason. As senseless as it is, there is method to the madness of Thunder Levin’s screenplay: a sense of actual structure to how it all plays out and some genuine imagination at work. It’s dumber than a bag of hammers, no doubt, but I’d dare to describe it as logically illogical, if that makes any sense. If not, keep in mind the movie is called Sharknado. ‘Nuff said!

Director Anthony Ferrante wisely keeps the pace peppy with very little time for the bland melodrama and excessive exposition that frequently plagues such films or, for that matter, giving the audience a chance to think too long and hard about what they just witnessed moments before.Inspired lunacy, an enthusiastic cast (sans one sourpuss), and a production clearly going the extra mile to put every penny, as few as there may have been, onto the screen have resulted in what is probably the closest thing to an overblown summer blockbuster you’ll probably ever see in the low budget world of b-cinema.

Speaking of summer blockbusters, thus far this summer I’ve sat in a theater and watched dozens of Iron Man suits battle a fire-breathing man. I’ve seen Mr. Spock ground and pound a superhuman atop of flying truck. I’ve seen a giraffe decapitated by an overpass. I’ve seen Jonah Hill raped by Satan. I’ve seen Will Smith’s kid nursed back to health by a giant eagle. I’ve seen Vin Diesel launch himself from a speeding car over two lanes of traffic and a multi-story chasm between overpasses to catch a woman in mid-air. I’ve seen Superman’s dad ride a giant dragonfly while being chased by spaceships. Oh, I’ve seen things on the big screen thus far this summer, and none of the spectacle, none of the idiocy, none of it has been as much fun to watch or brought me as much joy as what I saw on the small screen watching Sharknado.

If you only ever see one Asylum movie, one Syfy movie in your life, this is the one to see. If you already like this type of b-movie, you are going to love Sharknado. A cult classic is born." 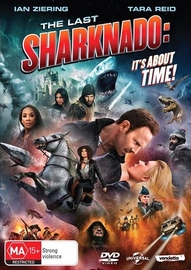