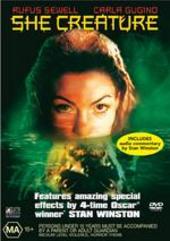 When a conniving circus owner stumbles upon a real live mermaid, he secretly steals the creature with dreams of fame and fortune. But after setting sail for America with his precious cargo, he soon discovers that this animal is as dangerous as she is beautifulâ€¦and she has an appetite for human flesh. Legendary monster maker STAN WINSTON (whose credits include ALIENS, TERMINATOR 2 and JURASSIC PARK) brings the filmâ€™s mythical main character to life and with great performances from stars Rufus Sewell (from DARK CITY) and Carla Gugino (from SPY KIDS) SHE CREATURE has enough sexy, stylish thrills to scare you to the bone.