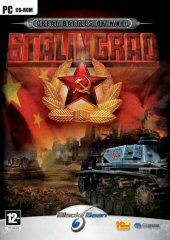 Unavailable
Sorry, this product is not currently available to order
The plot of the game unfolds during the period of July 1942 - January 1943 and tells the story of one of the most dramatic episodes of World War II.

Featuring two detailed campaigns, "Stalingrad" will let the player take command over Wehrmacht and lead the German forces into the city, then switch to the Red Army and liberate the Soviet stronghold from the occupants and obliterate the 6th Army under the command of Gen. Paulus. In contrast to many other RTS games out there, each mission in "Stalingrad" is created with historical authenticity in mind and with reference to the actual place and time to real events that took place during the war. Besides, the missions are created in such a way that campaigns give an authentic picture of events at the theatre of war operations.