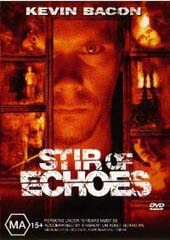 The main reason I really wanted to get this movie was because the actress who plays the part of the girl is Jennifer Morrison, who is well known for her character Dr Allison Cameron in House. This is one of her earlier movies from 1999 when she went under Jenny Morrison.

It is set in her home town Chicago and Kevin Bacon finds himself connected to her without knowing why. It intensifies when he is hypnotised which opens up his abilities. Secrets are revealed and more than one person is affected along the way. The soundtrack definitely fits the movie. The final outcome.....watch it and find out.

It will leave you on the edge of your seat.

1 out of 1 people found this review helpful.
In every mind there is a door that has never been opened.
Tom's a regular guy, a utilities lineman, married, with a young son, his wife is pregnant; he hangs out with long-time pals in a Chicago neighborhood. At a party, his sister-in-law hypnotizes him, and he goes into a deep trance. Before waking him, she suggests that he keep his mind open. That night he sees flashes of violence and the ghost of a young woman. His young son, too, is "a receiver," but while the boy is calm and coherent in his conversations with spirits, Tom is confused and agitated. Over time, the young woman's story comes to the surface, and Tom begins a hunt for her body
Re-released on
October 11th, 2006
Movie Format
DVD Region
Edition
Aspect Ratio
Director
David Koepp
Language
English
Length (Minutes)
95
Actor
Studio
20th Century Fox
Subtitles
English, Italian
Supported Audio
Original Release Year
1999
UPC
9321337024028
Product ID
1459267