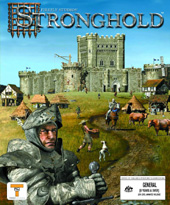 Unavailable
Sorry, this product is not currently available to order
Stronghold is a unique cross between city builders such as Caesar III or Sim City and a RTS in the tradition of Command & Conquer and Age of Empires. Set in medieval Europe, you'll establish settlements, build and manage castles and engage in siege warfare. The game incorporates much more building and "community managing" than a traditional RTS, yet allows for a more intense combat experience than city builders have featured in the past.

Set in Medieval Europe, Stronghold challenges your strategic building, resource management and RTS combat skills. Become the ruler of a virtual medieval world with each decision and policy they implement. Decide how to regulate taxes and rations, when to offer free ale or hold fairs, as well as many other policies that will have an impact on your citizen’s lives. Work to build and protect your castle and ultimately mount an invasion to dominate the enemy’s fortress. A campaign-style storyline develops through narrative and in-game interaction.

Stronghold’s multiplayer mode supports up to eight players over the Gamespy Internet gaming service and LAN connections. You can choose to compete in the multiplayer mode for control over your own castles or work together on the same castle, assigning control over aspects such as troops and resources management in a cooperative mode.

Building
Stronghold presents missions in the form of more than 20 building goals. You begin by establishing a community through the construction of basic housing. As villagers arrive and join the aspiring kingdom, you may build workshops to produce necessary resources for castle development and defense equipment. Throughout each mission, you're challenged to take on more responsibilities such as creating mining operations, adding new workshops, and constructing various castle elements like walls and defense mechanisms. Over 30 types of walls, towers and anti-siege equipment are available, varying in cost, stability and efficiency. Additionally, virtual builders have access to various castles-specific features such as moats, drawbridges, secret gates and keeps.

All Stronghold management aspects are simplified by the utilization of adjustable global settings and permanent onscreen controls which eliminate the need for you to micro-manage the game through more traditional sim genre controls such as lassoing. Additionally, personnel resources are simplified through the automatic creation of peasants and work assignments.