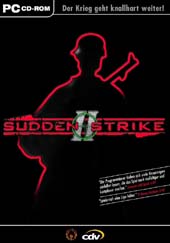 Unavailable
Sorry, this product is not currently available to order
It is easier to begin a war than it is to end it.
- Napoleon Bonaparte, 1769 - 1821

The whole world is nothing but a battlefield. And you are on the front line - in the very center of realistic battle action, which even amazes and delights the shrewdest strategy experts. As the commander of German, Russian, British, American and, finally, Japanese troops, you fight on water and on land as well as in the air. You can extend your actions through numerous specific commands in remarkable ways. The four different available difficulty levels and the fascinating multiplayer mode are thrilling beyond imagination. The user-friendly editor allows for unlimited supplies of professionally generated maps and missions - making sure the action never ends.

With Sudden Strike II the war is far from over!