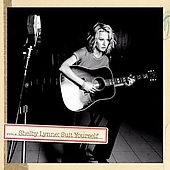 Shelby Lynne's 2003 album, IDENTITY CRISIS, was aptly named, as it saw Lynne move away from a big, lush, commercial radio-geared style to an earthier, stripped-down persona. SUIT YOURSELF takes this approach and runs with it, often sounding more like an impromptu late-night New York City singer/songwriter jam session than a product of the Nashville machine. Lynne's jazzy, loose vocal phrasing is in full effect, and her timbre is a bit huskier than before (perhaps due to the cigarettes she's seen holding in some of the album's photos). Many of the songs here have little to do with country music at all, from the opener "Go with It," which sounds like a cross between Badfinger and NO SECRETS-era Carly Simon, to "You're the Man," a sassy, straight-up Bessie Smith-style blues number. Kindred genre-mixer Tony Joe White lends two excellent songs and his multi-instrumentalist skills to the proceedings, which gives the album an even rougher vibe. One of Lynne's strongest and most idiosyncratic efforts, SUIT YOURSELF is the work of an artist truly coming into her own.