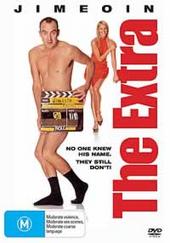 As the title character, he’s a guy who is looking for fame and fortune. At the moment, the closest he can get to the glitz and glamour is as an extra on a blockbuster movie trilogy called The Eternal Flame. He dreams about romancing the star of the movie, Katherine Arena (Kristy Hinze), but in real life the only people he meets are the other extras like Danny (Colin Lane), Simon (Raj Ryan), Claudia (Katherine Slattery), Kylie (Helen Dallimore) and Curtis Thai-Buckworth (Rhys Muldoon), a faded child star who is desperately trying to resurrect his career by directing a movie trailer he hopes will inspire financiers to bankroll his whole film.

When Curtis borrows money from nightclub owner and loan shark, Marko (Bob Franklin) there are strings attached and Curtis drags the impressionable Extra into his increasingly illegal schemes. They are soon pursued by Detective Ridley (Shaun Micallef), a cop with his own TV show, whose vanity far outweighs his talent either as a cop or performer.

Despite his ongoing failure to secure even a small speaking part, the Extra’s goals remain high, particularly after Claudia asks him to help her with an audition scene and she amazes him with her performance. They strike up a natural friendship just as Katherine Arena becomes fixated on the Extra and begins to pursue him.

Curtis is unable to pay his actors and has to settle for casting the Extra as the lead in his movie trailer which Curtis arranges to show to an international film financier – until Marco confiscates it.

Everything comes to a head on the night of the glittering premiere of The Eternal Flame when the Extra will finally have to decide the price of fame.