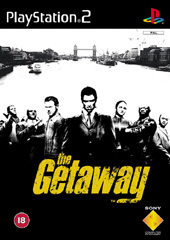 Unavailable
Sorry, this product is not currently available to order
Please note: This is the un-cut R18 version of The Getaway. An uncompromising action thriller of a game, The Getaway features breakneck, ultra-realistic driving action, mixed with combat on foot and unprecedented levels of cinematic realism, in what promises to be one of the toughest, grittiest games on any format.

The Getaway revolves around three violent men, locked in a struggle for power, justice, and revenge. Mark Hammond, an ex-gangster on the run and desperate to avoid capture so that he can clear his name, stands wrongly accused of the murder of his wife. Frank Carter, a ruthless vigilante copper, currently suspended from the Flying Squad, is prepared to go to any lengths - lawful or otherwise - to get justice.


Both men, desperate to clear their names, find themselves manipulated and controlled by the third: Charlie Jolson, a notorious crime boss and master of London's East End underground for over thirty years. Operating on either side of the law, they're both desperate for revenge and, for different reasons, both out to bring down London's king of crime.


Play both sides of the story. The Getaway has two complete, but interwoven, story threads. You can play through the game once as Mark Hammond, the gangster on the run, desperate to clear his name; then play through it again as the vigilante cop who stops at nothing, Frank Carter.

Over an hour's worth of compelling, movie-quality cut-scenes move the narrative along, delivered in a cinematic style that will engross you and drag you yet further into the dark and frightening world of organised crime.

Features possibly the largest living, breathing environment ever seen in an action game: you can move around more than 40 square kilometres of London back-streets and explore twenty interior real-life locations all immaculately rendered and riddled with underworld characters.

Every vehicle in the game can be taken and driven; but be warned that each car is also equally breakable.

When you're not in the car, you'll still be under threat on foot from any number of people who are out to get you. You'll need your wits about you at all times, and need to be prepared to back up your words with actions if necessary.

Bonus games allow you to explore the heart of London as an innocent tourist, or in a black cab or mini cab. All vehicles handle authentically, offering one of the most complete driving experiences around.
Release date Australia
December 11th, 2002
Game Platform
Publisher
Sony
UPC
711719432524
Product ID
1457325