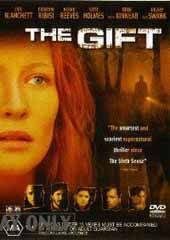 The only witness to the crime was not even there.

Widow and mother of three, Annie Wilson (Blanchett), makes her living by foretelling others' futures…though her own has become cloudier than even she can see. Threatened by client's violently jealous husband (Reeves) and plagues by visions of a missing town-girl (Holmes), Annie is unwittingly pulled into a thicket of lies and deception in which her extraordinary gift could be used against her…and get her killed.

Written by Billy Bob Thornton (Sling Blade) and Tom Epperson (A Family Thing), and directed by Sam Raimi (A Simple Plan), The Gift is a gripping tale of supernatural intrigue…and chilling terror.