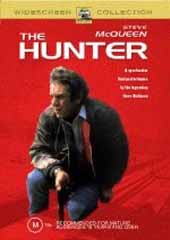 If you are a fan of Steve McQueen this movie is a must see. It was his last, and is based on as true story.

A spectacular final performance by the legendary Steve McQueen. A pure thriller! Steve McQueen's last movie shows the dynamic talent of the late, great actor in one of his most memorable roles: The true story of Ralph ‘Papa’ Thorson, a modern-day bounty hunter. Thorson's exploits are detailed as he pursues a number of fugitives who have skipped bail.

The chase comes full circle when he becomes the quarry of a vengeful psychopath. McQueen's multi-dimensional performance as Thorson, a man born in the wrong age, is a counterpoint to the explosive action in The Hunter.