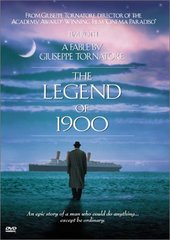 Unavailable
Sorry, this product is not currently available to order
Shortly after the Second World War, Max, a transplanted American, visits an English pawn shop to sell his trumpet. The shopkeeper recognizes the tune Max plays as one on a wax master of an unreleased recording, discovered and restored from shards found in a piano salvaged from a cruise ship turned hospital ship, now slated for demolition. This chance discovery prompts a story from Max, which he relates both to the shopkeeper and later to the official responsible for the doomed vessel, for Max is a born storyteller. Though now down on his luck and disillusioned by his wartime experiences, the New Orleans-born Max was once an enthusiastic and gifted young jazz musician, whose longest gig was several years with the house band aboard the Virginian, a posh cruise ship. While gaining his sea legs, he was befriended by another young man, the pianist in the same band, whose long unlikely name was Danny Boodman T.D. Lemons 1900, though everyone just called him 1900, the year of his birth. Abandoned in first class by his immigrant parents, 1900 was found and adopted by Danny, a stoker, and raised in the engine rooms, learning to read by reading horseracing reports to his adoptive dad. After Danny's death in an accident, 1900 remained on the ship. Increasingly lured by the sound of the piano in the first-class ballroom, he eventually became a gifted pianist, a great jazz improvisationist, a composer of rich modern music inspired by his intense observation of the life around him, the stories passengers on all levels of the ship trusted him enough to tell. He also grew up to be a charming, iconoclastic young man, at once shrewd and oddly innocent. His talent earned him such accolades that he was challenged by, and bested Jelly Roll Morton in an intense piano duel that had poor Max chewing paper on the sofa in agonies of suspense. And yet for all the richness and variety of his musical expression, he never left the ship, except almost, once, in the aftermath of his infatuation with a beautiful young woman immigrant who inspired the music committed to the master Max discovers in the pawnshop. Max realizes that 1900 must still be on the ship, and determines to find him, and to find out once and for all why he has so consistently refused to leave.
Release date Australia
January 27th, 2006
Movie Format
DVD Region
Edition
Aspect Ratio
Director
Guiseppe Tornatore
Language
English
Length (Minutes)
125
Studio
Reel
Subtitles
English for the Hearing Impaired
Supported Audio
Genre
Original Release Year
1998
UPC
9397910485890
Product ID
1477539