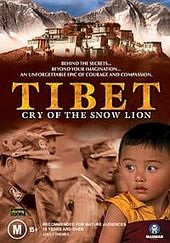 Unavailable
Sorry, this product is not currently available to order
TIBET: CRY OF THE SNOW LION is a dramatic documentary that takes viewers through the astonishing recent political history of the country. Spending over ten years making the film, director Tom Peosay presents a clear, concise, educational chronology that tracks the major events and developments in the Tibet-China conflict both within those two countries and internationally. The film shows the beauty of the country's Himalaya Mountains, the artistry of Tibetan clothing and monasteries, the practices of the Buddhist religion, and the gentle spirit of the Tibetan people. But the most powerful part of the film includes archival news coverage, interviews with politicians and historians, and testimonials from survivors of torture and imprisonment. Woven together, these pieces tell the story of the immensely disturbing, violent ongoing struggle resulting from Tibet's occupation by China.The film does an excellent job with its material, and viewers will find themselves searching for a solution and an answer to Tibet's problems long after the movie's conclusion.
"We don't want the Chinese in Tibet. We want our independence. We want our country back. The Chinese forbid us from saying that."
- Ngawang Nun, arrested for participating in pro-independence demonstrations

"I feel the outside world has a great lack of knowledge or understanding about Tibet. Some filmmakers have depicted the Dalai Lama as the standard bearer of human rights. I feel that is not accurate. Before 1959, the policies he pursued and defended in Tibet are much darker and crueler than the Negro slavery system in the United State before the Civil War. Since 1959, China has made progress in all areas, including human rights, in Tibet."
- Mr. Hu, Chinese Government Spokesman, APEC Summit, Seattle

"For an outsider it looks that the Chinese are doing a great thing to have hospitals, schools, roads in Tibet, but it's very hard for a Tibetan to say that I am a Tibetan and I want to see Tibetan culture or Tibetan religion being promoted or preserved. The worst thing for a Tibetan under the Chinese rule is that one cannot say that I am a Tibetan, as simple as this."
- Gendun Rinchen, Former Lhasa Tour Guide and Political Prisoner

"Ours has been a long struggle. We know our cause is just. Because violence can only breed more violence and suffering, our struggle must remain non-violent and free of hatred."
- H.H. The 14th Dalai Lama

"Many people have talked to me and said, there are so many problems faced by the Chinese people - why are you spending your time to also talk about the Tibetan issue? My answer is that this is not a question simply for the Tibetan people, this is a question for all people who see such human rights abuses. This is a problem for all of us living today on this earth."
- Wei Jingsheng, Chinese Human Rights Activist & Former Political Prisoner

"We must never give into the idea that it's hopeless or impossible. Everyone would have said that the Berlin Wall would never go down, and look at what happened. Russia changed, which was every bit as impossible in people's minds as China letting go of Tibet. Tibet can be free..."
- Robert A. F. Thurman, Ph.D, Professor of Indo-Tibetan Studies, Columbia University
Release date Australia
December 9th, 2005
Movie Format
DVD Region
Edition
Aspect Ratio
Director
Tom Piozet
Language
English
Length (Minutes)
100
Stars
Studio
Madman
Genre
Original Release Year
2003
UPC
9322225030718
Product ID
1477312