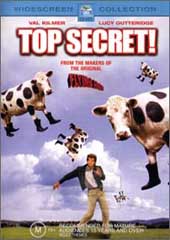 This film is a hilarious parody of every conceivable genre – teenage rock stars, espionage, war plus the proverbial ‘love story’. The gags come thick and fast as ‘Top Secret’ takes you from one parodic scene to the next. Scenes that include mistaken impromptu performances, the distress of double-crossed lovers and culminates in the ‘great escape’ involving a herd of sure-footed cattle!

Having spoofed us all with ‘Airplane’, the same team have their feet firmly on the ground in a totalitarian state… the result remains ‘Top Secret’.