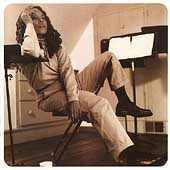 TRAVELING MILES was nominated for the 2000 Grammy Award for Best Jazz Vocal Performance.

Throughout the '90s the smoky-voiced contralto Cassandra Wilson has shunned piano accompaniment in favor of close-miked acoustic guitars, evoking a moodily sensual atmosphere in which pop, blues, country and straight jazz vocals all merge together. It helps that Wilson has a distinctly Southern blues cast to her singing, a quality immediately apparent on "Run The Voodoo Down," the funky opener to TRAVELING MILES, her impeccably self-produced homage to Miles Davis.

As is her wont, Wilson has chosen to mix it up on this tribute, setting lyrics to Davis compositions such as "Blue In Green," "Tutu" and "ESP" while reprising two favorite Miles covers, "Someday My Prince Will Come" and Cyndi Lauper's "Time After Time." The singer also contributes some of her own welcome originals such as the poppish "Right Here, Right Now," which itself sounds like a tribute to Joni Mitchell, another mentor-spirit hovering over the proceedings. The set closes with a playful reprise of "Voodoo," featuring a sisterly duet with African singer Angelique Kidjo, who sounds right at home.