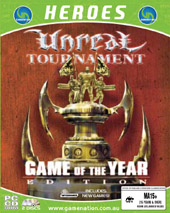 Unavailable
Sorry, this product is not currently available to order
Let's cut right to the chase, shall we? Unreal Tournament is a STAND ALONE (e.g. you don't need the first Unreal to play it) game that provides the ultimate in multiplayer excitement whether you're hooked up the Internet or not. Let's repeat: Unreal Tournament kicks just as much butt whether you're playing by (or with, as the case may be) yourself or on the Internet.

Unreal Tournament's got it all: a ton of amazing levels, kick-ass new weapons, brain-melting new modes of play (Capture the Flag, Assault Match, Domination Match, Last Man Standing, and ? of course - Deathmatch!), unbelievably deadly Bots (computer controlled opponents or team mates), and a slew of other features bound to have your happiness glands working overtime!

* Gripping single player experience that casts you in the role of a team leader tasked with beating the most vicious criminal scum in the galaxy. Your goal? To be victorious on 32 different play fields and emerge the Unreal Grand Master.

* Unparalleled user friendliness. Whether Unreal Tournament is the first game you've ever purchased or whether you're a grizzled veteran of the first person shooter scene, you'll find setting up a game (single or multiplayer) and jumping in to be a snap.

* All new weapons, including the dreaded IMPACT Hammer and the world-shaking Redeemer