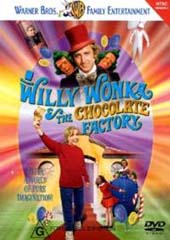 The original film in excellent DVD form!! I don't really need to go through the story line, I will say that it is an absolute treasure for the whole family, not trying to be corny but it's the truth!

This is my favourite movie of all time. Everyone I know has seen this movie at one time or another. Its one of those that you never get sick of. Willy Wonker never gets old. He is a classic & Gene Wilder places a brilliant role. Great if you are into musicals and the little ompa loompas are really cute. A must movie to be enjoyed by all ages.

A great movie. Enjoyed this more than the remake. The singing kept the story line alive and the characters had such dynamic personalities-not so scary for younger children. A great movie. Gene Wilder adds his magic to this great children's clas­sic movie.

The world is astounded when Willy Wonka, for years a recluse in his factory, announces that five lucky people will be given a tour of the factory, shown all the secrets of his amazing candy, and one will win a lifetime supply of Wonka chocolate. Nobody wants the prize more than young Charlie, but as his family is so poor that buying even one bar of chocolate is a treat, buying enough bars to find one of the five golden tickets is unlikely in the extreme. But in movieland, magic can happen.

Charlie, along with four somewhat odious other children, get the chance of a lifetime and a tour of the factory. Along the way, mild disasters befall each of the odious children, but can Charlie beat the odds and grab the brass ring?