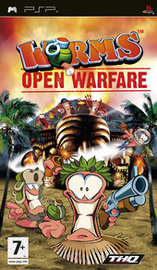 This game is action-packed and full of excitement. Full of exploding sheeps and cheeky worms out to kill each other.

This game has a solid set of fun single player challenges, but the real fun is in multiplayer.

Customize a team of worms and battle it out with your friends and A.I on the same PSP or battle your friends via ad-hoc for some awesome fun!

1 out of 1 people found this review helpful.
Retaining the same award-winning gameplay, unique sense of humor and clever mix of action and strategy that has epitomized the brand for almost a decade, Worms is the ideal quality gaming experience while on the move and is perfectly placed to make its debut on the Sony PSP and the Nintendo DS.

The processing power of the new handhelds means "Worms" contains the best of aspects of all previous "Worms" games whilst at the same time offering the best Worms AI and most balanced weapons system to date. Plus with the introduction of a whole raft of unique features and laugh-out-loud comedy, Worms engages the player with streamlined gameplay especially suited to the smaller screen and shorter play time of a handheld device.

Heralding a return to the classic 2D turn based gameplay, the easy to play yet hard to master gameplay makes Worms on PSP and the Nintendo DS a match made in heaven