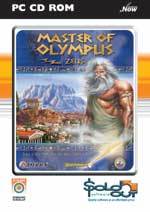 Unavailable
Sorry, this product is not currently available to order
Experience mythology as you never imagined it. Invite gods, monsters, and heroes into a city you create and rule, as the creators of the award-winning City Building Series immerse you in the Heroic Age of Greece. Players have the power to host Olympics, send Jason after the Golden Fleece, summon Hercules to fight the Hydra, raise an army, fight the Trojan War, and establish colonies nearby. Specifically designed for all types of players, Zeus is divided into hour-long episodes, has variable difficulty, and doesn't require a fast computer or new hardware. Zeus Master of Olympus is non-violent and family-friendly.