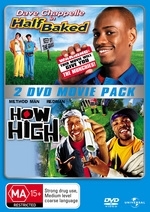 Half Baked:
After Kenny accidentaly kills a cop's diabetic horse by feeding it the food he purchased from a munchie run, he is put in jail and is given a 1 million dollar bail. The rest of the group must bail Kenny out before Nasty Nate gets to him. The group decides to sell marijuana that Thurgood gets through his job as a janitor at a pharmaceutical lab. They become pals with rap star Sir Smoke-A-Lot and the rivals of dealer Samson Simpson. On the side, Thurgood seeks the love of Mary Jane, an anti-pot daughter of a dealer.

How High:
Rap stars Redman and Method Man star as Jamal and Silas, two regular guys who smoke something magical, ace their college entrance exams and wind up at Harvard. Ivy League ways are strange to them, but they take it in stride - until their supply of supernatural smoke runs dry. That's when they have to start living by their wits and rely on their natural resources to make the grade.