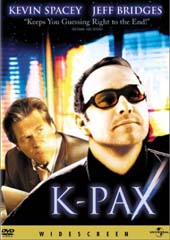 I have seen this film many times since I have bought it and it never gets old. The story is gripping and the acting is superb. A must see for fans of good cinema.

This movie is definitely one to watch! Kpax covers the mysteries of the sci-fi world, and combines that idea with the mysteries on earth. We are given a main character called Prot, who believes he can travel via beam of light. It all begins with him just appearing out of the blue at a train station. A lady needs help and so he rushes to her aid, the police see him helping the distressed woman and think he is her attacker. They cuff him and put him into the back of her van.

He is then sent to a mental hospital, where we start to meet some more characters that help move the story forward. A Phsyciatrist meets Prot and decides to work with him, thinking that Prot is just some dillusional man.

Prot does some unusual and unexplainable things during this time, then suddenly the movies story line takes a rapped twist to the south. His phsyciatrist decides that he wants to try hypnosis on Prot. Prot eventually agrees and the Doctor begins the treatment.

When the phsyciatrist snaps him out of hypnosis Prot is back to being Prot. Prot starts telling all the patients that he has to go home on July 27 back to his planet and he is willing to take someone back with him. With that the patients start writing letters stating why they wish to go with him.

This is where your mind starts to boggle. On the day that Prot leaves, a beam of lights comes into his room and the security cameras shut of for a few seconds. The Phsyciatrist races into his room to find Robert Porter lying under the bed in a comatose state. All the patients notice that one of them is missing and they run to that persons room, to find that they are not there. All that is the there is the letter that, that patient had wrote stating why she wanted to go.

We are now taken to a couple of weeks or months after Prot had appearantly left and the Phsyciatrist tells Porter (still in a comatose state) that the patient is still missing.

So the audience is left to wonder, where is that patient? Was Prot really an alien inside Robert Porters body? We really just don't know!!!

I absolutely love this movie and recommend it to everyone!

Change the way you look at the world.

A mysterious and extraordinary mental patient, named Prot, convinces both staff and fellow patients that he comes from a utopian planet called K-PAX. While his psychiatrist, Dr. Mark Powell, is baffled by this cheerfully confident man, Prot's description of life on a planet 1000 light years away awakens a sense of possibility among the other patients. The doctor gradually begins to witness this so-called alien having a remarkable effect on the mental health of the hospital's other patients. When Prot says he's going back before the summer ends, all the patients in the ward vie to go with him. As the days before Prot's announced departure from earth race by, Dr. Powell struggles with questions of science. Determined to prove the stranger is nothing more than a tragic victim of multiple personality disorder, the doctor soon finds himself doubting his own diagnosis.