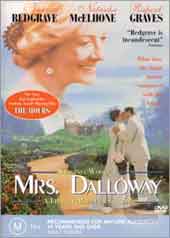 Unavailable
Sorry, this product is not currently available to order
Marleen Gorris, the Oscar winning director of Antonia's Line, brings to life Virginia Woolf's groundbreaking 1925 novel, which itself inspired Michael Cunningham's Pultizer Prize-winning novel 'The Hours'. Vanessa Redgrave plays Clarissa Dalloway, an MP's wife, whose life is thrown into crisis when a lover she rejected 30 years ago makes an unexpected appearance at a party she is hosting at her elegant London home, prompting bittersweet memories of her youth. Beautifully filmed in period London and featuring an outstanding cast including Natascha McElhone and Rupert Graves, Mrs Dalloway perfectly captures Virgina Woolf's concerns about choice, truth and destiny.
Special Features: