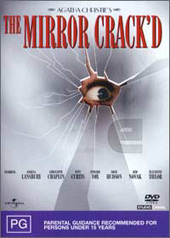 Unavailable
Sorry, this product is not currently available to order
Based on the novel by Agatha Christie. The year is 1953. The small English village of St. Mary Mead, home to Miss Jane Marple, is delighted when a big American movie company arrives to make a movie telling of the relationship between Jane Grey and Elisabeth I, starring the famous actresses Marina Rudd and Lola Brewster. Marina arrives with her husband, Jason, and when she discovers that Lola is going to be in the movie with her she hits the roof as Lola and Marina loathe each other on sight. Marina has been getting death threats and at a party at the manor house, Heather Babcock, after boring Marina with a long story, drinks a cocktail made for Marina and dies from poisoning. Everybody believes that Marina is the target but the police officer investigating the case, Inspector Craddock isn't sure so he asks Miss Marple, his aunt, to investigate… Special Features:
Release date Australia
January 1st, 2003
Movie Format
DVD Region
Edition
Aspect Ratio
Character
Director
Guy Hamilton
Language
English
Length (Minutes)
101
Stars
Studio
Universal Pictures
Supported Audio
Genre
Original Release Year
1980
UPC
3259190700420
Product ID
1462060